With the sunshine of summer officially upon us, there’s no better time to embrace all things natural: heat, happiness, and yes, hair! We here at Sine Qua Non are big fans of authentic beauty, and love the work that our Chicago theatre community has been doing to celebrate that special axiom this summer. Towards the goal, few thespian projects have come as close to growing the conversation around natural beauty and our relationship with the world around us more so than Walkabout Theatre Company.

Founded in 2001, Walkabout operates from a mission to produce site specific theatre that pushes boundaries–  both for their company and for their fortunate audiences. Known for their devised and immersive form of narration, as well as for their high levels of collaboration, Walkabout’s latest triumph here in Chicago was Storm, a re-imagining of Shakespeare’s famed fantasy The Tempest. This exquisite show was staged at Chicago’s own Links Hall and received excellent reviews! In partnership with Moon-Fool, an international theatre and music collective,  the team has taken this classic and remade it with an amazing focus on natural beauty. Walkabout’s production of Storm is as authentic as it gets.

What makes this adaptation unique is not just Walkabout’s beautifully stylized work with sound and movement– it’s their refreshing examination of The Tempest through a lens of nature and mankind’s relationship with the elements. Storm transplants The Tempest into a context of global warming, and expands the war waged by Prospero, the story’s patriarch, to include a fight against nature itself. In this vein, the company stages the Island’s natives, Caliban and Ariel, as defenders of Mother Earth’s natural world. 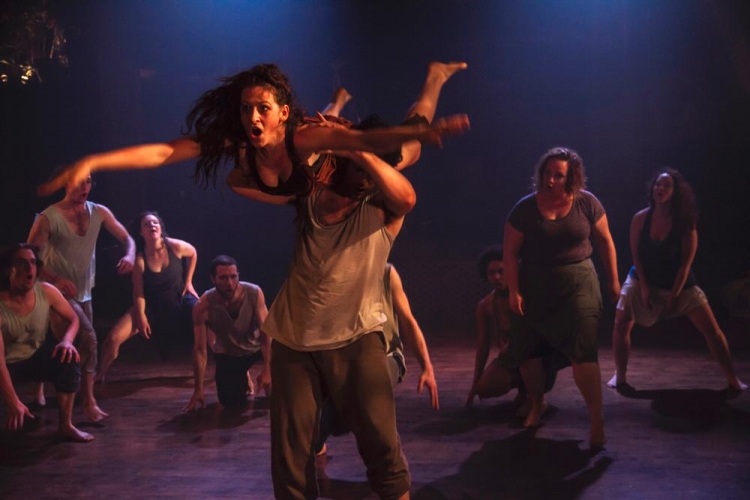 To help express this aspect, the costumes assigned to each character were extensions of their own relationship with the universe: Prospero (played by Thom Pasculli), as a geophysicist seeking to control his environment, sported goggles and a protective rain slicker. Meanwhile McCambridge Dowd-Whipple, playing Caliban (arguably the story’s fiercest member of all) wore her hair in such tangled, wild twists that they bordered on dreadlocks, and accented her untamed, corybantic movements stunningly. Even more lovely was the transformation that actress Dana Murphy (portraying Prospero’s daughter, Miranda) underwent in accepting her natural self through literally letting her hair down! Murphy began the show with a bedraggled braid that emphasized her adherence to her father’s wishes, and by the final act sported her hair long, wet, wavy, and free– much like her spirit in its authentic state. These performances are the perfect homage to being true to oneself in every aspect, hair included. Dana Murphy and Thom Pasculli letting the storm wash over them.

So what’s up next for this impressive company? Plenty! Walkabout will be reprising their hit production The Wild, a gripping and crazily imaginative examination of the space between civilization and the primal instincts within us all. According to the team, it’s a story of “what happens to people when institutions crumble and deities fail to show up,” and promises to be a spectacle worth catching, filled with acrobatic storytelling and zany costumes in motion.

The Wild will be playing as part of Chicago’s Night Out In the Parks event at both Humboldt Park and Garfield Park Conservatory for FREE on August 5th and 6th respectively. Walkabout’s summer finale is a great opportunity to get outside, let your hair down, and enjoy some beautiful Chicago theatre. Celebrate your authentic self, and check these guys out!